Q: What is Freemasonry?

A:  Freemasonry is the largest secular, fraternal and charitable organization.  It teaches moral lessons and self-knowledge through participation in a progression of initiatory Degrees.

Q: Are we a secret society?

A:  We are not, but Lodge meetings, like those of many other groups, are private and open only to members. The goals and aims of Freemasonry are available to the public.  Meeting places are known and in many areas are used by the local community for activities other than Freemasonry.  Members are encouraged to speak openly about its existence and the contributions of Freemasonry to the world.

Q: What are the secrets of Freemasonry?

A:  The secrets in Freemasonry are the traditional modes of recognition, which are not used indiscriminately, but solely as a test of membership, e.g., when visiting a Lodge where a member is not known.

Q: What happens at a Lodge meeting?

A:  The meeting usually has two parts:  as in any association there is a certain amount of administrative procedure – approval of minutes of the previous meeting, proposing and balloting on petitions for membership, discussing and voting on financial matters, election of officers, news and correspondence.  Then there are the ceremonies (or Degrees) for admitting new Masons and the annual installation of the Master and appointment of officers.  The three ceremonies for admitting a new Mason instruct him in the principles and lessons taught in the Craft and feature a lecture in which the candidate’s various duties are spelled out.

Q: Isn’t ritual out of place in a modern society?

A:  No. The ritual is a shared experience which binds the members together. Its use of drama, allegory and symbolism impresses the principles and teachings more firmly in the mind of each candidate than if they were simply passed on to him in matter-of-fact modern language.

Q: Why do Freemasons recite obligations?

A:  New members make solemn promises concerning their conduct in Lodge and in society.  Each member also promises to keep confidential the traditional methods of proving that he is a Freemason, which he would use when visiting a Lodge where he is not known.  Freemasons do not swear allegiances to each other or to Freemasonry.  Freemasons promise to support others in times of need, but only if that support does not conflict with their duties to God, the law, their family or with their responsibilities as a citizen.

Q: Are Freemasons expected to prefer fellow Masons at the expense of others in giving jobs, promotions, contracts and the like?

A:  Absolutely not.  That would be a misuse of membership and abuse of privilege.  On his entry in to Freemasonry each candidate states unequivocally that he expects no material gain from his membership.  At various stages during the three Degrees he is reminded that the concept of Brotherly Love is to be applied to the whole human race and that his charity should extend to all.

Q: Isn’t it true that Freemasons only look after each other?

A:  No.  From its earliest days, Freemasonry has been involved in charitable activities.  Since its inception, Freemasonry has provided support not only for widows and orphans of Freemasons but also for many others within the community.  While some masonic charities cater specifically but not exclusively for Masons or their dependents, others make significant contributions to non-masonic organizations.  On the local level, Lodges give substantial support to local causes.
New York Masons are proud of their Masonic Care Community in Utica, NY and the Masonic Medical Research Laboratory, also in Utica.  Various Grand Lodge-sponsored programs represent direct outreach to the community:  the NY Masonic Child ID program; MSAT (the Masonic Student Assistance Training program), which teaches teachers and other key school personnel to identify, mentor, and remediate at-risk students; the many scholarships; a Blood Donor program and sponsorship of youth programs.
A Mason Believes…that charity is the distinguishing human virtue, and that personal community service is the best demonstration of one’s commitment to humanity; [he] acknowledge[s] that words without deeds are meaningless, and [he] vow[s] to work with [his] Lodge to provide service to the community, and to promote charity, friendship, morality, harmony, integrity, fidelity and love.

Q: Aren’t you a religion or a rival to religion?

A:  Emphatically not.  Freemasonry requires a belief in GOD and its principles are common to many of the world’s great religions.  Freemasonry does not try to replace religion or substitute for it.’  Every candidate is exhorted to practice his religion and to regard its holy book as the unerring standard of truth.  That is why he takes his obligations on that book.  Freemasonry does not instruct its members in what their religious beliefs should be, nor does it offer sacraments.  Freemasonry deals in relations between men; religion deals in a man’s relationship with his GOD.

A Mason believes…that freedom of religion is an inalienable human right and tolerance an indispensable trait of human character; therefore, [he] will stand [his] Lodge with Brothers of all faiths, and respect their beliefs as they respect [his], and [he] will demonstrate the spirit of Brotherhood in all aspects of [his] life.

Q: Why do you call God the Great Architect?

A:  Freemasonry embraces all men who believe in God.  Its membership includes Christians, Jews, Hindus, Sikhs, Muslims, Parsees and others.  The use of descriptions such as the Great Architect prevents disharmony.  The Great Architect is not a specific masonic God or an attempt to combine all Gods into one.  Thus, men of differing religions pray togehter without offence being given to any of them.

A:  There are elements within certain churches that misunderstand Freemasonry and confuse secular rituals with religious liturgy.  Although some denominations have occasionally criticized Freemasonry, within their memberships there are many Masons and indeed others who are dismayed that the Churches should attack Freemasonry, an organization which has always encouraged its members to be active in the religion of their own choosing.

A:  Emphatically not.  While individual Freemasons will have their own views on politics and national policy, Freemasonry as a body will never express a view on either.  The discussion of politics at Masonic meetings has always been prohibited.

A Mason knows that his … obligation to community extends beyond [his] local sphere and is partly fulfilled in [his] patriotism: love of [his] country, obedience to its laws and celebration of the freedoms and opportunities it symbolizes.

Q: Are there not Masonic Groups who are involved in politics?

A:  There are groups in other countries who call themselves Freemasons and who involve themselves in political matters.  They are not recognized or coutenanced by regular Grand Lodges who follow the basic principles of Freemasonry and ban the discussion of politics and religion at their meetings.

Q:  Is Freemasonry and international Order?

A:  Only in the sense that Freemasonry exists throughout the free world.  Each Grand Lodge is sovereign and independent, and while following the same basic principles, may have differing ways of passing them on.  There is no international governing body for Freemasonry.

Q: What is the relationship between Freemasonry and groups like the Knights of Pythias, Odd Fellows and Elks?

A:  None.  There are numerous fraternal orders and societies whose rituals, regalia and organization are similar in some respects to Freemasonry’s.  They have no formal or informal connections with Freemasonry.

Q: Why don’t you have women members?

A:  Traditionally, Freemasonry is constituted for men.  The early stonemasons were all male, and when Freemasonry was establishing, basing itself upon that predecessor organization, its concern was with the role and responsibility of men in society.  There are two separate organizations for women in Freemasonry in New York State:  the Order of Eastern Star and the Order of the Amaranth.

Q: How many Freemasons are there?

A:  Under the Grand Lodge of the State of New York, there are 50,000+ Freemasons, meeting in more that 500 Lodges.  According to figures published by the Masonic Service Association of North America there were 1,569,812 members in Grand Lodges in the United States in 2005, the most recent date of record.  Worldwide, there are over 3 million.

Q:  Why do you wear regalia?

A:  Wearing regalia is historical and symbolic and, like a uniform, serves to indicate where members rank in terms of responsibility and service within the organization. 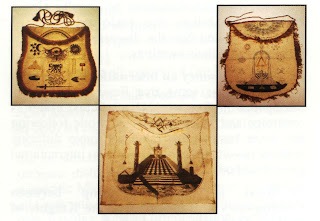 Q: How and where did Freemasonry start?

There are two main theories of origin.  According to one, the operative stonemasons who built the great cathedrals and castles had lodges in which they discussed trade affairs.  They had simple initiation ceremonies and, as there were no guilds certificates, dues cards or trade union membership cards, they adopted secret signs and words to demonstrate that they were trained masons when they moved from site to site.  In the 1600s, these operative lodges began to accept non-operatives as “gentlemen masons.”  Gradually these non-operatives took over the lodges and turned them from operative to “Free and Accepted” or “Speculative” Lodges.

The other theory is that in the late 1500s and early 1600s, there was a group which was interested in the promotion of religious and political tolerance in an age of great intolerance when differences of opinion on matters of religion and politics were to lead to civil war.  In forming Freemasonry, they were trying to make better men and build a better world.

As the means of teaching in those days was by allegory and symbolism, they took the idea of building as the central allegory on which to form their system.  The main source of allegory was the Bible,the contents of which were known to everyone even if they could not read, and the only building described in detail in the Bible was King Solomon’s Temple, which became the basic part of the allegory of the ritual.  The old trade guilds provided them with their basic administration of a Master, Wardens, Treasurer and Secretary, and the operative mason’s tools provided them with a wealth of symbols with which to illustrate the moral teachings of Freemasonry.

Q: How many Degrees are there in Freemasonry?

A:  Basic Freemasonry consists of the three “Craft” Degrees (Entered Apprentice, Fellowcraft and Master Mason).  There are many other Masonic Degrees and Orders, which are called “related” or “concordant.”  They are not basic to Freemasonry, but add to it by further expounding and illustrating the principles stated in the Craft.

Q: How much does it cost to be a Freemason?

A:  It varies from Lodge to Lodge, but anyone wishing to join can find a Lodge to suit his pocket.  Upon entry, there is an initiation fee and a member pays annual dues to his Lodge.  This covers his membership and the administrative cost of running the Lodge.

It is entirely up to the individual member what he gives to Charity, but it should always be without detriment to his other responsibilities.  Similarly, in New York State, he may join as many Lodges as his time and personal finances may allow, as long as it does not adversely affect his family life and responsibilities.